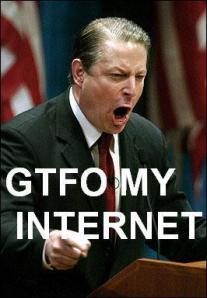 From Alternet we get this article about Al Gore possibly considering a civil disobedience protest:

Rainforest Action Network issued the invitation to the former U.S. vice president, according to RAN executive director Michael Brune. The San Francisco-based group has a twenty year history of protesting against destructive logging practices and other causes of climate change; it specializes in targeting corporations as much as governments.

Gore’s office confirmed that the former vice president had received RAN’s invitation and was considering it, though no decision has been made. “He has not accepted any of their offers to date,” Kalee Kreider, a spokeswoman for Gore, said of the RAN offer. Kreider did not deny that this phrasing leaves open the possibility of Gore saying yes down the road.

I would have SO much more respect for Al Gore if he participates. I already support his cause of global warming..but other than that, he is a big fan of the corporatocracy, just like all the Rethugs, Hillary and most of the Democratic Candidates.