← Polls are closing..start your engines!
About those disenfranchised delegates.. →

Did you celebrate Colin Powell Day? 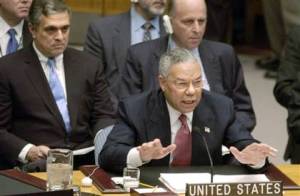 Yesterday was the fifth anniversary of Colin Powell’s speech to the United Nations Security Council to push for war with Iraq. Powell’s speech, as we now know, was full of lies. His speech was entitled: Iraq, failing to disarm. He even had a nifty slide show for the attendees. Behind him sat George Tenet, then head of the CIA.

No one fact-checked Powell, no one bothered to ask questions. It was accepted as fact by pretty much everyone. Bush had been beating the war drums for quite some time prior to Powell’s speech and the MSM fell right in line. The MSM did their job by selling us the war, and they did it very well:

CNN’s Bill Schneider said that “no one” disputed Powell’s findings. Bob Woodward, asked by Larry King on CNN what happens if we go to war and don’t find any WMD, answered: “I think the chance of that happening is about zero. There’s just too much there.” George Will suggested that Powell’s speech would “change all minds open to evidence.”

The Washingotn Post’s liberal columnist, Mary McGrory, wrote that Powell “persuaded me, and I was as tough as France to convince.” She even likened the Powell report to the day John Dean “unloaded” on Nixon in the Watergate hearings. Another liberal at that paper, Richard Cohen, declared that Powell’s testimony “had to prove to anyone that Iraq not only hasn’t accounted for its weapons of mass destruction but without a doubt still retains them. Only a fool—or possibly a Frenchman—could conclude otherwise.”

← Polls are closing..start your engines!
About those disenfranchised delegates.. →