Ted Stevens won’t be tossing in the towel.. 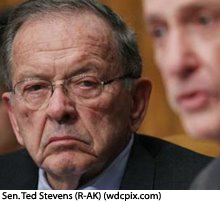 In fact, he has stated unequivocally that he will continue to run and continue to serve his constituents, in spite of being  a convicted felon as of this week. Per TPM:

The so called “Lion of Alaska,” returned home yesterday to a rally in his honor in the airport that bears his name.

Approximately 500 supporters greeted Stevens with the chant “We trust you,” Anchorage Daily News reported.
Some attendees wore shirts bearing the slogan, “F*#@ the feds, vote for Ted.”
“Anyone who thinks you can get a fair trial in the heart of liberalism, Washington, D.C., is smoking dope. He was railroaded,” Mark Kelliher, a retired engineer told the ADN expressing the distrust many Alaskans place in “outsiders,” or non-Alaskans.
Members of Alaska’s political elite also attended, including Sen. Lisa Murkowski, who urged the crowd to get friends to work and vote for Stevens and joined the elder senator in a little jig on stage.

Of course the Senate can dump his ass if they want to…but I am not holding my breath on that happening. McCain at least has called for this asshat to step down…I give him props for that.  But seriously…the people of AK don’t mind a convicted felon representing them? One convicted of lying  and who is known to have ties to the guy that ratted out the state reps that are now on trial in the state of AK courts for accepting his bribes?
Amazing to me…some folks just don’t mind anything that smells of corruption…as long as he brings home the pork. And Ted IS the king of pork. And the heart of liberalism is DC…lol..who knew? 😉

Posted on October 30, 2008, in Politics. Bookmark the permalink. Leave a comment.