← A budget without numbers is like a car without wheels.
Professor Turley on the Spanish Inquisition. → 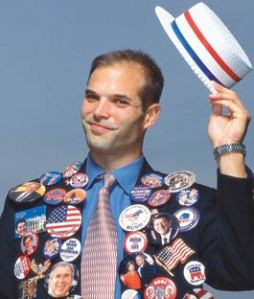 Matt’s latest piece is a wonderful bitchslap of the AIG carpetbaggers. He is responding to the recent NYT OpEd by one of their employees…actually former employee. Executive VP Jake DeSantis. Jake was a big wig in the Financial Products division…you know, the one that created the credit default swaps bullshit. It’s a must read! Just a small tidbit:

Are we supposed to believe that Jake DeSantis knew nothing about Joe Cassano’s CDS deals? If your boss and the top guys in your firm were all making a killing selling anything at all — whether it was rubber kayaks, generic Levitra or credit default swaps — you really wouldn’t bother to find out what that thing they were selling was? You’d really just mind your own business, sit at your cubicle and put your faith in the guys up top to fill you in if there was something you needed to know?

This would be a believable claim for an employee of some other wing of AIG, a company with well over 100,000 employees. But DeSantis works for tiny, 377-person AIGFP, a unit that had only two offices — one in London and one in Greenwich, Conn.

And we’re talking about financial professionals, the most shameless group of tirelessly envious gossips ever to walk the face of the earth. The likelihood that Cassano would pull in $280 million for himself, and his equally greedy, hopelessly jealous employees wouldn’t know not only exactly how he made that money but every last ugly detail about his life — from what skank he’s sleeping with to what side of his trousers he hangs on — is almost zero.

I know plenty of people who work in this world, and I’ve met very few who didn’t hate with every cell in their bodies anyone in their own companies who made more money than they did or got bigger bonuses at Christmastime. Gossiping about each others’ bonuses, and bitching about each others’ compensation, is the national pastime for these people.

So forgive me if I don’t buy this story that poor Jake and his buddies didn’t know about Cassano’s CDS business.

Get em Matt!!! Bitchslap the living shit out of these punks. Taibbi is one of the best journalists out there..I can never get enough of him.

H/T to MPS and the Vanity Press for having this up on their sites.

← A budget without numbers is like a car without wheels.
Professor Turley on the Spanish Inquisition. →