← Illegal Immigration? Why it’s the fault of the unions!
Whoa, David Brooks said what??? → 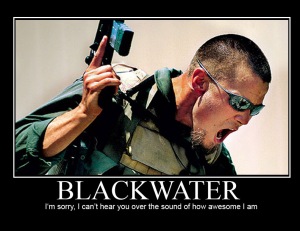 From the NYT via Crooks and Liars:

In a significant blow to the Justice Department, a federal judge on Thursday threw out the indictment of five former Blackwater security guards over a shooting in Baghdad in 2007 that left 17 Iraqis dead and about 20 wounded.

The judge cited misuse of statements made by the guards in his decision, which brought to a sudden halt one of the highest-profile prosecutions to arise from the Iraq war. The shooting at Nisour Square frayed relations between the Iraqi government and the Bush administration and put a spotlight on the United States’ growing reliance on private security contractors in war zones.

Investigators concluded that the guards had indiscriminately fired on unarmed civilians in an unprovoked and unjustified assault near the crowded traffic circle on Sept. 16, 2007. The guards contended that they had been ambushed by insurgents and fired in self-defense.

A trial on manslaughter and firearm offenses was planned for February, and the preliminary proceedings had been closely watched in the United States and Iraq.

But in a 90-page opinion, Judge Ricardo M. Urbina of Federal District Court in Washington wrote that the government’s mishandling of the case “requires dismissal of the indictment against all the defendants.”

In a “reckless violation of the defendants’ constitutional rights,” the judge wrote, investigators, prosecutors and government witnesses had inappropriately relied on statements that the guards had been compelled to make in debriefings by the State Department shortly after the shootings. The State Department had hired the guards to protect its officials.

Aint’ that some shit to start off the new year with?

Posted on January 1, 2010, in Blackwater, jurisprudence. Bookmark the permalink. 7 Comments.

← Illegal Immigration? Why it’s the fault of the unions!
Whoa, David Brooks said what??? →