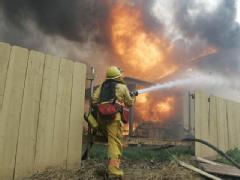 They are still burning..people are still living in places they shouldn’t have to. But my sister is back in her home, my dad is cranky but safe and my asthmatic sister is staying with a friend until the air quality cleans up a bit. This article blames the drought and global warming for the severity of the wildfires. I don’t know about all that..but I do know they seem to get worse each time, being a native Californian..I have seen far too many of these bastards.

Almost a million people have been displaced in SoCal. Over a thousand homes and businesses have been lost. They are saying almost 20% of San Diego’s population has been displaced.

But Michael Chertoff had to make a guest appearance in San Diego. Thank God FEMA or Homeland Security wasn’t involved in the evacuations..who knows wtf would of happened.

Its all been pretty orderly. San Diego County actually had to issue a press release that they had enough supplies that were donated and for folks to check the other evac centers to see what they needed if they were in the giving spirit.

Fucking awesome how people pull together in times like these ain’t it? Oh..guess what..