The Iraq war is over? Nigga please!!!

Yes I used the ‘N’ word, as a brown bitch I feel I can do that and fuck anyone that says different…and Obama used a lot of words that were bullshit in a bucket tonight during his prime time speechifying on the…cough..War in Iraq. From Obama and his minions I get this horseshit tonight:

As Operation Iraqi Freedom ends, our commitment to a sovereign, stable, and self-reliant Iraq continues. Under Operation New Dawn, a transitional force of U.S. troops will remain to advise and assist Iraqi forces, protect our civilians on the ground, and pursue targeted counterterrorism efforts.

There is NO democracy in Iraq, they are NOT civil, stable or self-fucking-reliant…civil war will break out sooner than later…Maliki was not elected yet he runs the country. What other realities do you need to know to realize that Obama didn’t do much of anything but continue the Bush43 Bullshit.From Obama’s speech, via McClatchy:

As we do, I’m mindful that the Iraq war has been a contentious issue at home. Here, too, it’s time to turn the page. This afternoon, I spoke to former President George W. Bush. It’s well known that he and I disagreed about the war from its outset. Yet no one can doubt President Bush’s support for our troops, or his love of country and commitment to our security. As I’ve said, there were patriots who supported this war, and patriots who opposed it. And all of us are united in appreciation for our servicemen and women, and our hopes for Iraqis’ future.

Obama praised Bush43…are you friggin kidding me? Bush43 and his henchman used 935 lies to drag us into Iraq. The Big O made a huge speechifying moment over pulling out around 100,000 soldiers but still leaving 50,000 of our citizens behind. The Big O never said anything about ‘winning’ the war in Iraq…because anyone with two brain cells to rub together knows there was no reason to enter and decimate Iraq…other than they had a nasty-ass dictator that had dissed Bush the First.

So yes…berate me for using the ‘n’ word on The Big O…fuck him and fuck his warmongering agenda…bastard ain’t no better than Bush the Second…and that’s a fucking fact jack. Tonight he was nothing more than a jive ass….well…you know..But wtf will you do about the lies and fuckery spewed by our President and his administration tonight during a prime time address..or the former Pres and his administration of assholes that perpetuated this horseshit on us and the people of Iraq?

Those fuckers ‘leading’ Iraq never met any benchmarks…none. That was all bullshit too.

Richard Engel on what now for Iraq, from Rachel’s show tonight.

Iraqi Foreign Minister Zebari: US must provide a "very clear timeline" to withdraw its troops from Iraq

I don’t know how much clearer BushCo and John McCain need to hear this from the Iraq Government. From the Yahoo article:

In an interview with Reuters, Zebari said the agreement, including the timeline, was “very close” and would probably be presented to the Iraqi parliament in early September.

Asked if Iraq would accept a document that did not include dates for a withdrawal, Zebari said: “No, no. Definitely there has to be a very clear timeline.”

BushCo is still pushing for immunity for US troops with regard to Iraqi Law prosecutions, which is going over like the proverbial lead balloon. Also being pushed by BushCo: the amount of power the American military will have to detain Iraqi citizens, and their authority to conduct military operations.

Frankly, I don’t care what excuses or rationale are used…I want our troops home NOW.

Iraqi Poll: The surge isn’t working for them either.

A poll has been done of the Iraqi’s pov regarding “The Surge”. This poll was administered by ABC News, the BBC and the Japanese broadcaster NHK. What they found was, according to the ABC News writeup, a ” deepening dissatisfaction with conditions in Iraq, lower ratings for the national government and growing rejection of the U.S. role there.”
Sounds a lot like the way a majority of Americans think about things..only we aren’t occupied by a foreign military. For the full poll and questions asked, click here. For those that just want the ‘lowlights’, here you go:

More Iraqis say security in their local area has gotten worse in the last six months than say it’s gotten better, 31 percent to 24 percent, with the rest reporting no change. Far more, six in 10, say security in the country overall has worsened since the surge began, while just one in 10 sees improvement. More directly assessing the surge itself — a measure that necessarily includes views of the United States, which are highly negative — 65 to 70 percent of Iraqis say it’s worsened rather than improved security, political stability and the pace of redevelopment alike.

Petraeus will regale us with his pov this morning at 9:30 am left coast time on CSPAN 3. You can also watch it live online here.

Allawi paying for lobbyists to tout him for Iraqi PM 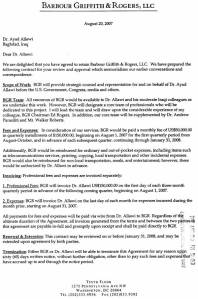 To the tune of 150K a month, Allawi has hired one of the biggest stars on the lobbying circuit. The letter (click for larger) shows the whole contract and billing cycle for Allwai.

He is of course campaigning for Maliki’s job. Gee, its almost like the Presidential election cycle here my dear reader!!!

Its a swiftboat campaign to boot!!!!

At least the Iraqi’s have learned something from the American Democracy BushCo has been shoving down their throats.

Too bad its the smarmy side of Democracy.

Bush saw a half-full glass when he put his ‘spin’ on the report, but the important stuff wasn’t touched on in his press conference. WaPo gives us a view of the finer points of the ‘report’ on Benchmarks:

Despite stepped-up training, the readiness of the Iraqi military to operate independently of U.S. forces has decreased since President Bush’s new strategy was launched in January, according to the White House progress report released yesterday.

Combat losses, a dearth of officers and senior enlisted personnel, and an Iraqi army that has expanded faster than the equipment available for it have resulted in a “slight reduction” in the number of units designated at Level 1 status, or “capable of independent operations,” the report said.

But the fine print in the 25-page document contains some remarkably candid descriptions of problems, as well as qualifiers for claimed achievements and briefly referenced, unexplained new facts.

The Pentagon refused yesterday to elaborate on the “slight reduction” in independent Iraqi units. Any information about the number, size or designation of such units is “in the classified realm,” said a spokesman, Lt. Col. Mark Ballesteros.

Bush and his boyz really can spin the obvious..then they just bury this shit. Its an old trick similar to LOOK, look at the shiny object..isn’t it pretty!

And then they take you for all you got. Are you talking Divisions or Battalions gents? It’s a valid question..are they still sucking the teat of the US military or are they ‘fully independent”? The writeup goes on to say the Iraqi Military has been going backwards more than forward in the readiness department. Gee, that’s a shocker!

The article also goes on to explain how technically, the Iraqi’s look good on paper regarding their commitment to rebuilding their own infrastructure, but the truth is…

They haven’t released even a quarter of the money needed to begin work. They will get ALOT done that way right? Perhaps they are a tad worried about all the graft and corruption that is rampant in the government? Ya think???

It also touches on other benchmarks that are suspect as to how well Iraq has performed. Oh yeah..that is a REAL hair-raising statement there.