Category Archives: Its about the Oil Stupid

The 72-13 final vote sends the bill to President Bush, who this week dropped a longstanding veto threat against the measure over $4 billion on community block grants. The legislation already passed the House on a 272-152 vote on Wednesday. All 13 ‘no’ votes were Republicans.

All no votes were Rethuglican..figures..they are the folks that wanted to take all the controls off banks and financial institutions..yet when the shit hits the proverbial fan..they don’t want to fix their fuckup. And, to add to this..the Rethugs are blocking any other bills until the Democrats lift the drilling ban. From The Hill again:

The GOP wants a more open amendment process that could allow a vote on lifting a congressional moratorium on offshore oil drilling.

“We want to address the issue of gas prices now,” said Minority Leader Mitch McConnell (R-Ky.). “The important thing to do is stay on the subject.”

Drilling will NOT do a fucking thing for the price of gas NOW you fucktard. Jesus Christ on a cracker..they still keep those talking points going long after they have been shown to be utter bullshit.

The bastards want Congress to first lift the ban on offshore drilling before they will consider changes to “a bill designed to rein in speculation on the markets in which crude oil futures are traded. The senator and others think that speculators have driven up the price of oil and could be responsible for more than $1 of the cost of a gallon of gasoline at the pump.“

Manipulative bastards. From the McClatchy link:

Though some Republicans are sympathetic to the need to provide tighter control over energy markets, they say that any energy legislation should include lifting the congressional moratorium on offshore drilling for oil and natural gas.

Cantwell and most Democrats oppose lifting the offshore-drilling ban. They quote the Department of Energy as saying that offshore oil and gas wells wouldn’t come online for seven to 10 years and the impact on prices would be insignificant. Democrats also say that oil companies already have more than 68 million acres along the outer continental shelf and on other federal lands under lease that haven’t been drilled on.

Republicans counter that there are abundant resources offshore and polls show that a majority of Americans support more drilling on the outer continental shelf.

Only Americans that are uninformed support offshore drilling. Because they have been constantly fed bullshit by the Republicans and Bush that doing so will lower the price of gasoline in the immediate future. Nothing could be farther from the truth.

Its all a ruse to help out their cronies in the Oil Bidness. Pete Domenici is heading this horeshit move in order to help his personal pals at Mirant, an Atlanta-based energy company. What started this little standoff is Maria Cantwell’s blocking of three nominations to the Commodity Futures Trading Commission. One of Pete’s pals is one of the nominees.

Posted in Its about the Oil Stupid, Price of Oil 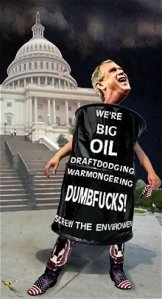 As if this is a surprise..

Iraq is preparing to allow four of the biggest western oil companies to renew exploitation of the country’s vast reserves for the first time in almost four decades.

Iraq’s oil ministry stepped up talks with BP, Exxon Mobil, Shell and Total after the US vice-president, Dick Cheney, visited Iraq in March, where he also pressed the government to revive efforts to pass the hydrocarbon law that nationalist MPs were blocking. The first contracts are expected to be signed this month. Some 90% of Iraq’s budget comes from oil revenues.

Iraq’s oil minister, Hussain al-Shahristani, told the Guardian this week that the deals did not amount to the privatisation of the country’s oil. But the four companies are heirs to the consortium given the concession to control Iraq’s oil by King Faisal, the foreign Sunni Arab whom the British imposed on Iraq’s majority Shia population after occupying the country during the first world war. They lost their right to explore new fields in 1961 after the monarchy was overthrown, and nationalisation followed under the Ba’ath party.

This is also a …cough..shocker..these contracts were not competitively bid. I do love how Mr. Halliburton dropped in for a visit in Iraq in March. The Big Dick Cheney can finally say his work is done there..fucker.

Artwork by The Worried Shrimp.

Posted in Iraq Oil Law, Its about the Oil Stupid