Obama throws the LGBT community a bone. How nice. 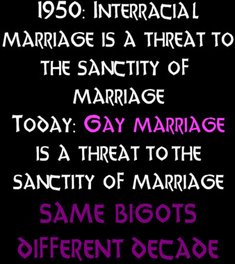 His DOJ supports DOMA and DADT, yet The Big O has issued an executive order that will provide the partners of federal workers with federal benefits. There is some question as to whether his decree is a Memorandum or an Executive Order. A Memo only works whilst The Big O is in office..so it’s an important fact.

Gee, how nice of him. Slight problem however:

The order Obama intends to sign tomorrow would apply to the Defense Department’s civilian workforce but not the Pentagon’s men and women in uniform.

Thanks dude..but it’s still not enough. It’s a crumb of an offering you friggin jackass.

Graphic filched from Two Crows over at Preserve,Protect and Defend.

Posted in Marriage equality, separate but equal is bullshit

Yesterday, Vermont Gov. Jim Douglas (R) vetoed a bill legalizing gay marriage that passed the state legislature last week. Now the legislature has voted to override Douglas’ veto: The Senate voted 23-5 in favor of the override, and the House voted 100-49. Vermont joins Massachusetts, Connecticut, and Iowa as the only states where gay marriage is legal, and Vermont is the first state to approve gay marriage through the legislature.

Update: The Human Rights Campaign’s blog rounds up some statements from elected officials in Vermont.