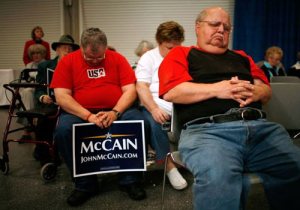 All I can say is…fuck the old man…the show must go on! MSNBC is reporting he is using the excuse that he wants to craft and work on…wait for it…

Yeah..right. His numbers are dropping like a rock..that has no bearing on his decision right?

The saga of McCain’s lobbyists..

“the heiress” own…the man said the following about lobbyists:

“Whenever there’s a corrupt system, then you’re going to have these birds of prey descend on it to get their share of the spoils,”

“I would not allow anyone who worked for my administration to go back to lobbying,” McCain said. “They would have to make that pledge.”

They won’t go back to lobbying? Well, perhaps that’s because they are lobbyists NOW, and they are just on a ‘leave of absence’ from those lucrative positions.

Listen to him say all the quotes above here.

The DNC has released a short ad condemning McCain for his fuckwittery regarding lobbyists.

The website McCainsLobbyists.com is a great interactive site to actually get the lowdown on many of the 159 lobbyists that work for him in some capacity; fundraising, running his campaign or advising him on major policy issues. ProgressiveAccountability.org has an excellent listing. It lists who they worked for, their clients and the issues they lobbied on as well as their current position inside McCain’s campaign. PA’s list seems endless when you first happen on the site.

This batshit-crazy old coot really must think we are all idiots. What else explains it? Its not like his lobbying brigade is a classified state secret.

Another thing to remember…even if they have left the “official” capacity of working on/in/for the campaign, many of them are still fundraising for him. Something lobbyists are very good at.

And we thought it couldn’t get any worse than George Bush…jesus, were we wrong. McCain i a lying sack of sheep shit that transcends The Shrub m’dear reader.

Weathervane McCain seems to think he knows what is best for Iraq..not Maliki. Amazingly enough, some folks will buy this bullshittery.

This is how McCain supports our troops?

Tomorrow is Memorial Day and I plan to run a piece by a veteran of the Iraq War. Today however, we take Weathervane McCain to task for his lies and bullshit he spews about supporting our soldiers. I hate this man like I hate Bush…perhaps even more so because he IS a veteran. May he suffer as our soldiers do..a thousand times worse for all eternity.

FAILING GRADES: McCain’s record on supporting veterans is one of the worst in Congress. IAVA has given him a grade of a “D” for voting against veterans’ priorities so often between 2000 and 2006. A scorecard of roll call votes compiled by the Disabled American Veterans found that McCain has voted for veterans funding bills only 20 percent of the time. For example, in May 2006, he voted against an amendment providing $20 billion to the Department of Veteran Affairs’s (VA) medical facilities. In April 2006, he was one of just 13 senators to vote against providing $430 million to the VA for outpatient care “and treatment for veterans.” McCain has railed against comprehensive universal health care and wants to give veterans the “freedom to choose to carry their V.A. dollars to a provider that gives them the timely care at high quality and in the best location.” But as New York Times columnist Paul Krugman notes, “[T]he Veterans Health Administration is one of the few clear American success stories in the struggle to contain health care costs. … [I]t’s an integrated system — a system that takes long-term responsibility for its clients’ health — to deliver an impressive combination of high-quality care and low costs.” McCain’s plan, however, would “privatize and, in effect, dismantle the V.A.” In his narrow-sighted focus on eliminating earmarks, McCain may also cut funding for military housing.

From The Progress Report

Posted in McCain, Support the Troops

Except if your a anti-Bush/McCain protester. Those folks are highly interested in this affair! A h/t and a hug to SuzieQ for posting this delicious piece of reality for Weathervane McCain. From the writeup:

A Tuesday fundraiser headlined by President Bush for U.S. Sen. John McCain’s presidential campaign is being moved out of the Phoenix Convention Center.

Sources familiar with the situation said the Bush-McCain event was not selling enough tickets to fill the Convention Center space, and that there were concerns about more anti-war protesters showing up outside the venue than attending the fundraiser inside.(emphasis mine)

W00T!!!! Makes me smile don’t cha know? Also a shout-out to Betmo for telling me about this gem so early on a Saturday morn.