In a word…NO. Not yet anyway, the federal court system will now decide, thanks to Eric Holder and the Justice Dept, whether the NOLA police officers should be jailed for the rest of their lives or put to death.

This is about the murders and subsequent cover-up, by a total of eleven NOLA police officers, of two unarmed individuals and the shootings of four of their unarmed friends on the Danziger Bridge in the days and hours, Sept 4, 2005 to be exact, after Katrina hit and the levee’s failed. I wrote about these murders here. ProPublica, the Pulitzer prize-winning online news organization, has never let this story drop and for that I love them. You can read the history of this heinous crime, and others by the NOLA PD after Katrina on their website here on the left sidebar.

To his credit today, Eric Holder announced the 27-count indictment of the six remaining police officers involved in this incident. The others have confessed and/or plead guilty to an assortment of crimes (charges of conspiring to obstruct justice and failure to report a felony) connected with these cold-blooded murders of unarmed men just looking to escape the carnage and death that was New Orleans after the levee’s failed and all state, local and federal government authorities failed to help and/or protect them.

The five years of cover-ups started to unravel in 2008 when the state dismissed all charges against the police officers and the feds picked up the case as a civil rights violation case. The remaining six murderers, all current or former NOLA police officers, are being charged with the following:

The officers are charged with deprivation of civil rights under color of law, as well as other charges, including conspiracy, obstruction of justice, making false statements and the use of a weapon during the commission of a crime of violence.

The charges break down this way:

* Bowen, Gisevius, Faulcon and Villavaso are all charged with a civil rights violation for shooting James Brissette, a 17-year-old killed on the eastern side of the bridge, as well as for injuring members of the Bartholomew family.

* All six men are charged with the cover-up, accused of conspiracy to obstruct justice and making false statements to investigators.

Their fate is now in the hands of the federal court system. As someone who has a long, proud family history of law enforcement, I feel no mercy for these men. The names of these men, all current or former police officers, are:

I hope the juries show them no mercy. Mercy is up to God for these men, and I hope he has none for them either, because they showed no mercy to James Brissette and Ronald Madison when they killed those unarmed men in cold calculated blood. 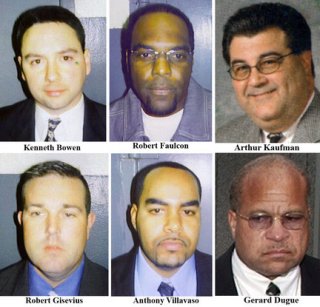 Former New Orleans police officer Michael Hunter pleaded guilty Wednesday to charges of conspiring to obstruct justice and failure to report a felony for his role in the Danziger Bridge shootings, which occurred in the aftermath of Hurricane Katrina. He’s the third ex-cop to admit guilt in the ongoing case.

On Sept. 4, 2005, Hunter and other officers barraged a group of civilians with gunfire, killing two and wounding four others. The latest guilty plea, covered in depth by our partners at the New Orleans Times-Picayune, offers fresh details about that bloody day.

The judge who accepted Hunter’s guilty plea said she was “sickened by the raw brutality of the shooting and the craven lawlessness of the cover-up” by police.

Almost five years after the fact..It’s about time justice prevails in this case. PBS’s Frontline has more.