Migrant workers give more than they receive. 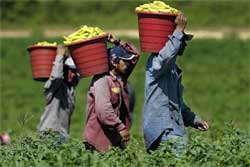 This info comes to us courtesy of CommonDreams:

Often vilified and mistreated, migrant workers benefit both the countries they move to and the ones they leave behind, says the latest Human Development Report released Monday.

The perceived negative burden of migrants on host societies does not correspond to reality, according to the report, produced annually by the U.N. Development Programme (UNDP).

The key message of the 217-page report is that large gains to human development can be achieved by lowering the barriers to movement and improving the treatment of migrant workers.

The study estimates that “approximately 740 million people are internal migrants, which is almost four times as many as those who have moved internationally.”

And among those who have moved across national borders, “only one third moved from a developing country to a developed country”. Nearly half of this group are women.

The entire report can be read here. The rightwing nutters love to go after the migrant workers, telling us how much they sponge off the taxpayer and all that other horseshit.

Next time a rightwinger starts spewing forth on immigrants and migrants..ask them when was the last time they picked grapes or lettuce in 110 degree temperature’s for less than minimum wage.