View the video here on my video page.

And the fucking cops were in on it? Also, old Ernie was a staunch militia supporter in the 90’s. The militia he was involved in, the Viper Militia, had five members out of the 12 arrested, that plead guilty to conspiracy and weapon’s charges.

They are marginalized, therefore they are bitter. 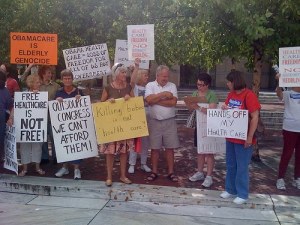 Reading MSNBC’s First Read this morning, I was struck right between the eyes by one section regarding the rightwing nutters coming out of the woodwork and why:

They were irritated with the direction of the country after the 2008 election, with a man as president they didn’t vote for, and with a Congress ruled by Democrats. They were angry with being out of power and having — because of being in the minority — what they felt was no say.

That, m’dear reader, is the crux of the problem. They are just pissed the fuck off that they LOST control of the government.

HAHAHAHAHAHAHAHAHAHA..fuck all you rightwing nutters..twice even. Suck it up and deal with it, like we had to do for eight-long-fucking-years under the Bush cartel.

Perhaps they all aren’t astroturfer’s after all. They are just highly pissed off that they are marginalized and have no real say anymore. All their representatives were either voted out or hanging onto districts thick with rightwing nutters when the majority of the state voted blue in 2006 and ‘08. So, like spoiled children all they can do is make a scene and scream at the top of their lungs. Again, from First Read:

But there was no indication that these folks were so-called “Astroturf” grassroots supporters. There were many who were affiliated with the tea parties and even LaRouchies likening Obama to Hitler. One LaRouche organizer said he was there to “cause some trouble.”

They are the true believers. They were also big-time Fox News viewers and Glenn Beck disciples, hammering home the perception that this is where these people get their news, er, information. One mother-daughter combo — unprompted — enthusiastically boasted, “Fox rules!” “It’s all we ever watch!”

These fuckwits will not go away quietly, they are going to raise holy hell every chance they get. Because, that is all they have…acting like a 3 year old in the grocery store that didn’t get his way. They will be constantly whipped up by the likes of Limbaugh, Dick Armey and their ilk.

So we need to fight fire with a gigantic money-laden firehose. From Politico:

A new coalition on Thursday launched $12 million in television ads to support President Barack Obama’s health reform plan, in the opening wave of a planned tens of millions of dollars this fall.

The new group, funded largely by the pharmaceutical industry, is called Americans for Stable Quality Care. It includes some odd bedfellows: the American Medical Association, FamiliesUSA, the Federation of American Hospitals, PhRMA and SEIU, the service employees’ union.

The decision of labor and progressive groups to join with industry groups could draw new heat about the president’s package from the left.

The ads began airing at about 11 a.m. ET Thursday.

At this point..I don’t give a shit who does it, I just want the nutters exposed and then marginalized once again. They lost, they are now the minority and as such get nothing but a lump of coal in their stockings. From Politico again:

The official provides a little more back story: “These groups were part of a looser coalition that started back in January that focused on the links between health reform and the economy. Now that the debate is turning on what health reform means for the individual, they felt the need to launch a new front that addresses some of those particulars while debunking some of the myths that are floating around. Plus, these groups recognize that their collective voice packs more punch than if they were to just speak out individually.”

As long as they have money and connections..go for it..slap the shit out of the reichwing jackasses..you have my permission. 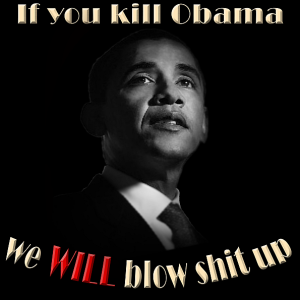 A possible assassination plot to take Obama out at Invesco Field on Thursday night.From the Hill:

DENVER — Authorities in Denver have scheduled a press conference Tuesday afternoon amid a report by a television station of a plot to assassinate Sen. Barack Obama (D-Ill.) during his Thursday speech at the Democratic convention at Invesco Field.

Police say they will discuss the facts surrounding a traffic stop in Aurora, Colo., where methamphetamine and firearms were found. Several people are being held in state custody and federal charges are anticipated, according to a news release from the U.S. attorney’s office in Denver.

Nothing in the news release suggests the arrests have anything to do with the convention or a plot to attack Obama, although a Secret Service agent is among the law enforcement officials scheduled to appear on Tuesday.

According to a report by KUSA-TV, at least four people are under arrest in connection with a plot to kill Obama during his speech Thursday night at Invesco Field. The television station cited law enforcement sources as saying one of the suspects said the group planned to come to Denver to kill Obama.

One of the suspects told authorities they were “going to shoot Obama from a high vantage point using a … rifle … sighted at 750 yards,” according to the KUSA report.

The station said police found two high-powered, scoped rifles in the car along with camouflage clothing, walkie-talkies, a bulletproof vest, a spotting scope, licenses in the names of other people and methamphetamines.

A public affairs official with the attorney’s office in Denver said they would provide no other information on the news conference.

Graphic from the multi-talented Dark Wraith.