The NRA has stated they will spend roughly $40 million dollars to defeat Obama. We can read that as code for a gigantic swiftboating campaign.

They have begun by lying their collective asses off about his second amendment position. The graphic below, courtesy of Politico, is the back of a wallet-sized card the NRA is handing out, evidently so their neanderthal supporters can rip it out and start ticking off all the falsehoods about Obama at a moments notice. Notice number 10- Wouldn’t one think Weathervane McCain would do the same? Of course its position on the card is tantamount to push-polling tactics. 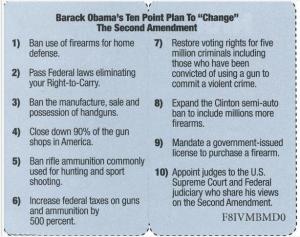 Factcheck.org has the bald-faced lies up on their site and debunks the blatant lies and half-truths. Check it out.

The NRA has gone so far as to actually print up a flier using Obama’s logo and color scheme, as well as his font. That gem is below: 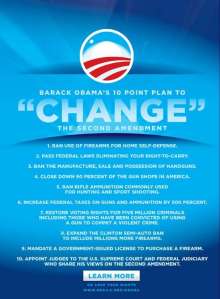 Next up, we have the ads they are going to run nation-wide using two assholes named Kurt and Karl Rusch. Krazy Karl claims to be a veteran and a staunch knuckle-dragging, card-carrying NRA member. They are short ads thank god, so check them out below.

Kurt is a real gem isn’t he?

Ah yes, veterans, patriotism and a scary black man who wants to take all the guns away from white folks….all in one sixty second commercial.

Obama has his policies and plans for guns and the second amendment here and here. The NRA isn’t even fucking close m’dear reader.

Swiftboating works for the reichwingers….it’s a shame that a cross-section of the American voting public buys into them. I was a card-carrying member of the NRA until they got all political and full of bullshit and bravado.

I own a handgun and have my entire adult life, I was taught to shoot and handle them as a young adult by my father who had what some might consider a damn arsenal. I believe in our second amendment right to own guns.

But I swear to Buddha, I am so sick of this type of campaigning…I could go postal on the asshole that thought this friggin crap up and I wouldn’t even blink a brown eye as I squeezed the trigger. Yes, I am that pissed..

The 527’s: A primer for the coming campaign season

From TNR comes this listing..both Democratic and Rethuglican on some of the big 527’s that will get their hands dirty this silly season. I disagree that many of the leftwing sites they list do smear campaigns, as they usually list facts along with their ads or commercials. From their list, the top Rethug sites:

They also list MoveOn and several other liberal 527’s. But several of the progressive groups have said they will not engage in smear campaigns because of Obama’s request to refrain from such bullshittery. The Rethuglicans..not so much.

Also, Obama has started up a site to fight all the smears rearing their ugly heads already..like the Michelle Obama “Whitey” tape that doesn’t exist and several other specious lies. Your can reach it by typing www.fightthesmears.com.