Lord do I hate these mutha fuckas. I feel every last one of the bastards listed on their board needs to be tried for war crimes at the very least. SuzieQ had a post up about it today which linked to this site. From the linked to site:

The web site of the neoconservative based Project for a New American Century think tank has been taken down. The think tank in their own documents advocated the virtues of using the U.S. military as a global police force. They also endorsed preemptive war as a way to shape the world and even lobbied to get Bill Clinton to invade Iraq back in 1998. Contributors and signatories associated with the think tank included several high profile figures in George W. Bush’s administration including Paul Wolfowitz, Donald Rumsfeld, John Bolton, Scooter Libby, Dick Cheney, Richard Armitage and Richard Perle. Documents originating from this think tank have been the subject of a great deal of criticism by the 9/11 truth and anti-war movements. It now looks as if the neoconservatives whose agenda has been faltering as of late have decided to pull the plug on the web site for the purposes of damage control. If not, than somebody forgot to pay their Internet provider. We’ll let you be the judge of which is the more likely scenario.

These smarmy bastards are scum and deserve a cell at the Hague..since most if not all of them are or were involved in BushCo’s bullshit occupation of Iraq and the resulting debacle of death. If the smarmy site is down forevah….hoo-fucking-ray!!! If they just need to pay their internet hosting bill..too bad..I wish them nothing but horror and pain for all the days they have left. The photos below are the assholes that signed their names to the infamous 2000 memo..make they all rot in hell.

Thanks to Betmo for the heads up 🙂 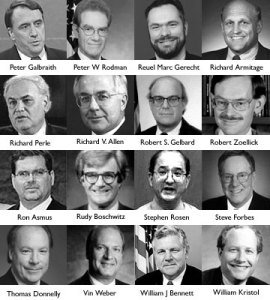