A couple of days ago I did a post on former Hewlett-Packard CEO and McCain supporter Carly Fiorina. She is thinking of running for one of Cali’s state senator seats. I always look for an unflattering photo of wingnuts when I write about them and found a very delicious one of her:

The Lazy Iguana commented that the photo was ripe for photoshopping. Lazy took on the challenge and here are his stellar results: 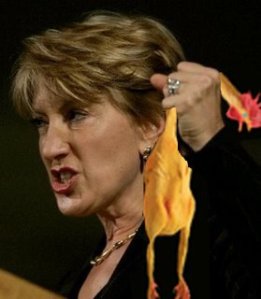 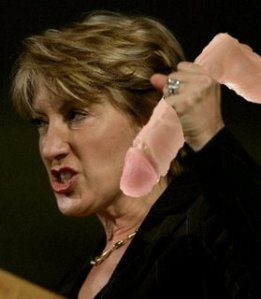 So, I am putting it out there for folks that have photoshopping abilities…lets see if anyone can beat Lazy’s wonderful work. Leave a link to the graphic if you take the challenge and all of them will be posted here on Leftwing Nutjob. Be imaginative! Lazy sure was :>)

UPDATE!!! We have another contestant..Big Fella, who writes at Sirens Chronicles and his own blog, The BFD Blog. Love the smoke coming out of the printer! 😉 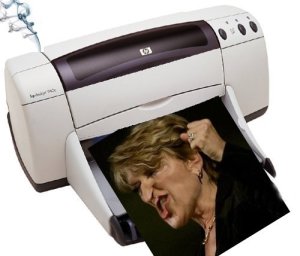 UPDATE#2-Here is Fuzz’s version of Ms. Fiorina! Thank you Fuzz!

UPDATE #3, the wonderful Nonnie’s version of our dear Carly with Johnny McCain:

Damn fine work Bloggers! Bless you all for participating, I love you guys 😉

The video speaks for itself….and count how many times that fuckwit mentions getting rid of Saddam, and that Obama should thank Bush.

A man who authorities said was keeping weapons and military-style gear in his hotel room and car appeared in court Thursday on charges he threatened to assassinate Democratic presidential candidate Barack Obama.

Raymond Hunter Geisel, 22, was arrested by the Secret Service on Saturday in Miami and was ordered held at Miami’s downtown detention center without bail Thursday by a federal magistrate.

A Secret Service affidavit charges that Geisel made the threat during a training class for bail bondsmen in Miami in late July. According to someone else in the 48-member class, Geisel allegedly referred to Obama with a racial epithet and continued, “If he gets elected, I’ll assassinate him myself.”

Wow wee, Only 22 years old. Somehow I thought it would be an older guy. One thing to keep in mind..this wingnut also hated George Bush: “he hated George W. Bush and that he wanted to put a bullet in the president’s head,”- Secret Service said. Of course that could be horseshit..we dunno.

The smell of bullshit first thing in the morning..

When I heard this bs a week or so ago..I thought about posting on it..then..I said nah…just ignore it..do not give it more life than the idiots who already are.

But it’s taken on a life of it’s own..and its a friggin rumor! No one has been able to provide “the tape”…no one has been able to bring this supposed comment to the masses. Yet the rightwing nutjob factory is all over it. If some jackass had access to this tape…it surely would of seen the light of day by now…so ol Hillary could claim her..cough..rightful place at the head of the Democratic ticket.

Now, the leftwing nutjobs for Hillary are on it like stink on shit too. Larry Johnson no less..yes, THAT Larry Johnson.

As dnA posts this morning: Are you Freaking Serious? Dude..are you? Larry…get thee behind me Satan..your fucking out there with the wingnuts that trashed your candidate and her husband for years dude..You are sleeping with the enemy on this you dumb sumbitch.

Not one to link to DKos, but this story is pretty good..and for the love of Gawd, it needs to be out there just as much as the wingnuts are out there, blathering on about the Michelle Obama Whitey Tape that NO one has seen yet they ALL just know exists.

Just like the Muslim school bullshit and all the other crappola spread by the rightwing nuttery..I hope this too shall pass..but I ain’t holding my breath.

Rob from OpEdNews did a piece recently about how he supports Ron Paul and why other progressives should as well. After I choked on my morning cuppa and read it several times, I was astonished that he would go the route he took to make his point. I guess in the long run, if you have to pick a Rethug to support, RP would stand a better chance than any of the rest of the current crop of jackasses.

But not with this Leftwing Nutjob folks..no sir, no way, no-fucking-how. Now, if I had to live under a Rethug rule..I guess then perhaps I might be able to say Paul would be the best of the slimy lot..but not by much, if at all.

Back to Mr. Kall’s writeup. He also posted it over at DailyKos and was promptly tarred and feathered by a bunch of wingnuts. I know..not all Kos folks are wingnuts..but they surely don’t like individuals that hold alternative pov’s to theirs..thats a fact. You can be as liberal as they come but if you somehow step on their Kos-like toes..all hell breaks loose and they come gunning for ya and want you banned asap. Well, I slogged through many of the OpEd comments and the DailyKos comments where I found the following video:

I heart this guy..really I do..I like how he thinks about Ron Paul and other issues. His blog is pretty good although not current, I might add as is his KosBlog. So, just consider this a little YouTube and blog-whoring for James Risser a good progressive voice in the vast Blogosphere that must have a busy life since he isn’t blogging regularly any longer.