The post title is heavy on the sarcasm. We get little tidbits of news about the simply massive amount of fraud and corruption but then…it just fades away into the sunset.

I am tired of that bullshit. It’s huge and its costing us, as in American’s…Billions upon billions.

So, what does Maliki do? Why, according to a NYT writeup, he fires the folks charged with ferreting out the graft and corruption.

Reminds me of the Bush administration…how about you? From the NYT’s link above:

The government of Prime Minister Nuri Kamal al-Maliki is systematically dismissing Iraqi oversight officials, who were installed to fight corruption in Iraqi ministries by order of the American occupation administration, which had hoped to bring Western standards of accountability to the notoriously opaque and graft-ridden bureaucracy here.

The dismissals, which were confirmed by senior Iraqi and American government officials on Sunday and Monday, have come as estimates of official Iraqi corruption have soared. One Iraqi former chief investigator recently testified before Congress that $13 billion in reconstruction funds from the United States had been lost to fraud, embezzlement, theft and waste by Iraqi government officials.

The moves have not been publicly announced by Mr. Maliki’s government, but word of them has begun to circulate through the layers of Iraqi bureaucracy as Parliament prepares to vote on a long-awaited security agreement.

You know…if keeping our soldiers alive and in one piece isn’t enough of a reason to bring them ALL home now…this fucking horseshit should be, even for the neocons and the extreme rightwing nutjobs for crying out loud.

And the secrecy..another ala BushCo bush league move. Also there is the fear of retaliation. To speak on the record about what happens in the Iraq government can cost one their life. Again from the NYT:

Senior Iraqi officials and four of the dismissed officials, many of whom asked not to be named for fear of government reprisals, said inspectors had already been removed in the Ministries of Water Resources, Culture, Trade, and Youth and Sport. In addition, inspectors have been removed from the cabinet-level Central Bank of Iraq, and from two religious offices, the Sunni Endowment and the Christian Endowment, whose leaders carry the rank of deputy minister.

One senior Iraqi official said that the list of ministries whose inspectors had been dismissed also included the Ministry of Foreign Affairs, but the ministry’s public affairs office denied that on Monday.

Sweet-friggin-Jesus, the inspector for the Central Bank has been shitcanned…what a fucking farce. 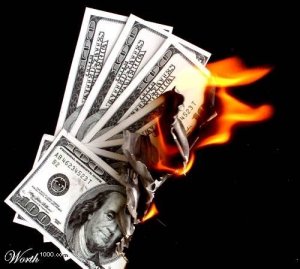 Just remember, this is YOUR money being squandered, or to be more specific…your children and grandchildren’s money since we borrow it from fucking China and others. Oh and typical BushCo bullshit here too: The inspectors and investigators get no protection from the US who has demanded that they be put in place to begin with. Again the NYT piece:

But Stuart W. Bowen Jr., who leads an independent oversight office in Washington, the Office of the Special Inspector General for Iraq Reconstruction, and who is currently working in Iraq, said he knew of six of the dismissals. He said the inspectors general were vulnerable because once their offices were created, the United States provided little support and training..[]

This shit makes me crazy…or crazier..not sure which m’dear reader. The second page of the writeup is sure to jack your jaw…or you simply do not give a shit what is done with our billions. Check it out if you have the balls, or the medications to relieve the anxiety that will come with reading how Maliki is stacking the deck, allowing known graft and corruption and putting suceeding in putting all government actions in secret, without one friggin ounce of sunlight, oversight or accountability..Saddam Hussein-style.

I hope Bush chokes on it like a pretzel…every remaining day of his miserable fucking life.

Crossposted, without all the vulgarity, at the UnCapitalist Journal. 😉

Weathervane McCain seems to think he knows what is best for Iraq..not Maliki. Amazingly enough, some folks will buy this bullshittery.

The US and Iraq have been in ‘negotiations’ for awhile now over a permanent..cough..pact. A pact that will govern how and what we are allowed to do within Iraq’s borders. No matter what Bush says, Iraq is a soveriegn nation, right? Yes, we saved them from themselves and brought democracy to all the citizens of Iraq and yet, they have the audacity to bitch and piss and moan that we are pushing them around. The nerve! (snark) From Reuters:

Iraqi Prime Minister Nuri al-Maliki said on Friday talks with the United States on a long-term security pact were at a stalemate because of U.S. demands that encroached on Iraq’s sovereignty.

The United States and Iraq are negotiating a new security deal to provide a legal basis for U.S. troops to stay in Iraq after December 31, when their United Nations mandate expires, as well as a separate long-term agreement on political, economic and security ties between the two countries.

Some folks in the Iraqi government have gone so far as to say…wtf dudes? We don’t need your stinking bases and thousands of troops! The wingnut Al-Sadr hasn’t been quiet either on this issue. Flapping his gums so to speak, via a letter, to the great unwashed masses he said this, via CNN:

“the resistance will be exclusively conducted by only one group. This new group will be defined soon by me.”

Sigh…Al-Sadr didn’t stop there of course. He had to bring up the “M” word a few times as well:

“We will not stop resisting the occupation until liberation or martyrdom.”

One of the reasons the deaths in Iraq have dropped is because Al-Sadr’s army is in a ceasefire mode. Bush or Petraeus conveniently forget to mention this when they are bragging about how low the death count has been lately. Johnny McCain doesn’t either. Imagine that.

The Iraqi government is threatening to pull out of the talks and write their own ‘take it or leave it’ pact for the American occupiers. BushCo mouthpieces whine that Iraq is circumventing the whole process by taking their gripes public. Seems the Iraq government just doesn’t cotton to us as the ‘great liberators’. Could this be because we want to build roughly 50 permanent bases in their country, control their airspace and legal immunity for all American soldiers and contractors?

Nah, that can’t be whats pissing them off..cough. Oh Hell No!

Artwork by The Worried Shrimp. Crossposted at Bring It On!

Posted in Al-Sadr, bullshit on a stick, Bush, Iraq, Maliki

Iraqi Prime Minister Nouri al-Maliki announced Sunday that sectarian leaders have come to an agreement on several contentious draft laws which have been identified by the US as key to the country’s progress. Under the new agreement, former Baath Party [party website, in Arabic]; members not convicted of any crimes will be allowed to participate in the political process and serve in the civil and military service and procedures will be established to allow the release of uncharged security detainees. One of al-Maliki’s advisers also indicated that the leaders have agreed to a draft law on the distribution of oil revenues . The proposals must all still be adopted by the Iraqi Council of Representatives [official website, in Arabic].

In early August, the Sunni Iraqi Accordance Front left the government after al-Maliki refused its demands that he pardon uncharged security detainees and let all government-represented groups participate in security matters. Later five Iraqi Cabinet ministers belonging to the secular and nonsectarian Iraqi National List announced a boycott of government meetings, effectively ending Sunni representation in al-Maliki’s government. The move prompted Shi’a and Kurdish leaders to create a new coalition government to ensure that the coalition government will maintain a majority in the 275-seat legislature and be able to push through legislation seen as essential to the stabilization of Iraq. Reuters has more. BBC News has additional coverage.

Allawi paying for lobbyists to tout him for Iraqi PM

To the tune of 150K a month, Allawi has hired one of the biggest stars on the lobbying circuit. The letter (click for larger) shows the whole contract and billing cycle for Allwai.

He is of course campaigning for Maliki’s job. Gee, its almost like the Presidential election cycle here my dear reader!!!

Its a swiftboat campaign to boot!!!!

At least the Iraqi’s have learned something from the American Democracy BushCo has been shoving down their throats.

Too bad its the smarmy side of Democracy.