Yay!!!! MSNBC is reporting it.TPM has a writeup here. Sadly I figure he won’t be wearing prison orange soon as he has years of appeals to file. But still, it makes me giddy that this disgusting jackass finally got some comeuppance. 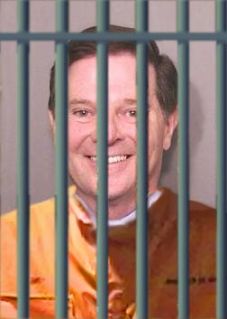 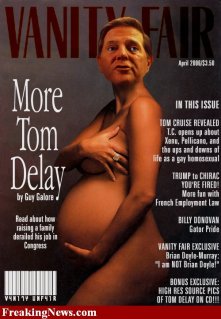 Those wonderful folks at CREW (Citizens for Responsibility and Ethics in Washington) have filed an FOIA request (Freedom of Information Act) with the jackholes at the DOJ demanding the doc’s to find out exactly why those fuckwits refused to prosecute one of the biggest, most corrupt former members of Congress…Tommy ‘hottub’ Delay. One would think Obama’s hue and cry about transparency would make this request a no-brainer. From CREW’s website:

Why did disgraced former Congressman Tom DeLay (R-TX) never face federal prosecution? The public has a right to know, but the Department of Justice isn’t telling. Citizens for Responsibility and Ethics in Washington (CREW) has filed a Freedom of Information Act request with the Department of Justice (DOJ) requesting all documents and communications related to the five year investigation into the former Texas lawmaker and his associates. Mr. DeLay is slated to face state charges in Texas later this month; as a result, CREW asked DOJ to expedite a response to the request.

“One of the most corrupt members to ever walk the halls of Congress will never have to answer for operating the House like a pay-to-play casino. The American people deserve to know what evidence the Department of Justice collected on Mr. DeLay and why that evidence was not sufficient to charge him,” said Melanie Sloan, CREW Executive Director. “The Department of Justice has not made prosecuting crooked government officials a top priority. The Public Integrity Section lacks the staff and resources necessary to prosecute even some of Washington’s demonstrably most unscrupulous leaders.  The Obama administration must ensure this section has resources it needs to do its job properly. After all, if Tom DeLay can get away with brazenly selling legislative assistance to Jack Abramoff, who knows what other scheming self-interested members of Congress might try?”

I don’t know about you folks, but I am friggin dying to know why Eric Holder and company refused to prosecute this corrupt bag of batshit. 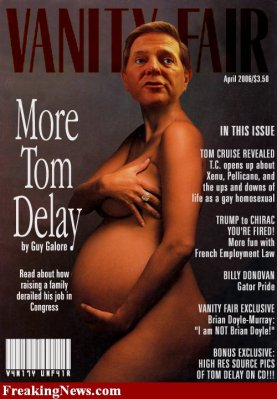 We can only hope. From TPM:

Five years after he was charged with conspiracy and money laundering in an alleged scheme to funnel corporate money into the 2002 Texas elections, former House Majority Leader Tom DeLay may soon stand trial after a ruling by a state appeals court cleared perhaps the final remaining obstacles in the case.

And his lawyer tells TPMmuckraker DeLay couldn’t be happier with the state of the case.

“He wants to go to trial. He’s been wanting to go to trial from the very beginning,” says Dick DeGuerin, the high-profile Texas defense attorney who is representing DeLay. “There’s no evidence by any stretch of the imagination that could convict him.”

Overturning a lower court Wednesday, the Texas Court of Criminal Appeals ruled in a case brought by DeLay’s two co-defendants, John Colyandro and Jim Ellis, clearing the way for the case to move forward. The Austin American-Statesman reports:

The Texas Court of Criminal Appeals unanimously ruled that the lower state 3rd Court of Appeals erred when it accepted the co-defendants’ arguments that the money laundering law did not apply to them because the funds involved were checks, not cash. The all-Republican court, in effect, said the lower court acted prematurely.

The state’s highest criminal court also dismissed the defendants’ constitutional challenge that Texas’ law banning corporate donations was too vague or overly broad to be understood.

We must be positive…or negative..what-the-fuck-ever…that Delay and his cronies will get to do the perp walk one of these days….whilst I can still revel in the deliciousness of it all. Please excuse all the photoshops of Delay. I despise that lyin’ sumbitch with every fiber of my being.

Delays cronies won’t be getting a free pass from the judge. 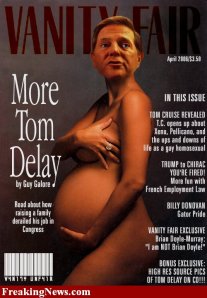 The Texas Third Court of Appeals has allowed money-laundering indictments to stand against two alleged co-conspirators of former US House Majority Leader Tom DeLay (R-TX), rejecting their argument that the state laws used to prosecute them were unconstitutionally vague or overbroad. The Austin-based intermediate appellate court on Friday affirmed (pdf) a trial court’s denial of habeas relief sought by John Colyandro and Jim Ellis, who were originally indicted in 2004. The defendants are accused of accepting $190,000 in illegal campaign contributions from corporations and transferring the money to the Republican National Committee, which then allegedly donated the same amount to candidates for the Texas Legislature. The court concluded that restrictions on corporate campaign contributions in the Texas Elections Code need not survive strict scrutiny, and Justice G. Alan Waldrop wrote:

[W]e believe that a person of ordinary intelligence is capable of intending and designating his or her contributions to a political committee to be for lawful purposes unrelated to supporting or opposing a political candidate. Whether misuse of such funds by the political committee or innocent redistribution of such funds for unlawful purposes may have implications for the contributor or raise additional constitutional concerns is not before us in this appeal.

An attorney for DeLay predicted on Monday that the charges against the defendants would eventually be dismissed because the defendants are accused of accepting checks, while the appellate court concluded that the term “funds” applied only to cash until the language was amended in 2005. AP has more. The Houston Chronicle has local coverage.

DeLay himself still faces money-laundering and conspiracy charges, although another conspiracy charge was dismissed last year. Following his indictment in 2005, DeLay stepped down as House majority leader, later resigning from Congress and eventually withdrawing his candidacy for re-election. Separately, a former aide to DeLay pleaded guilty in 2006 to conspiring with lobbyist Jack Abramoff and others to bribe public officials. The US Senate Indian Affairs Committee that year issued a report calling the connections between Abramoff and another former DeLay aide “astonishing.” US Rep. Bob Ney (R-OH) also pleaded guilty to conspiracy and making false statements after accepting money and gifts in exchange for taking actions on behalf of Abramoff and his clients.

Can’t wait for this trial to finally start up. Delay and his buddies have been living on borrowed time. Lets see if Hot Tub Tommy is still smiling when his trial is over..shall we? 😉